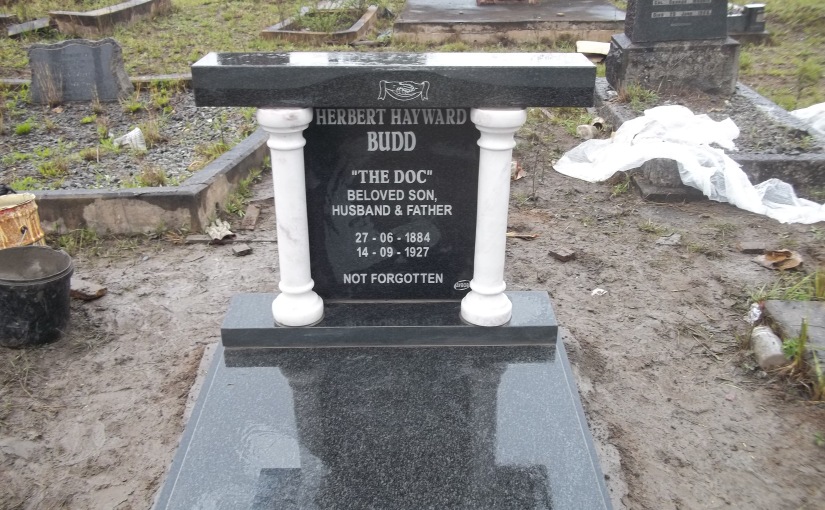 Herbert Hayward Budd, always known as ‘The Doc’ was my great uncle. He had a fascinating history before his untimely death aged only 43 in 1927. Working as the Medical Superintendent on Robben Island, his specialism was leprosy (in the 1920s, the Island housed a leper colony). Visiting another leper colony in the Eastern Cape in April 1927, some 700 miles from his home on Robben Island, he was taken ill and died very suddenly. As was common at that time he was buried where he died in Umtata. His wife Lil and son Billy (only 7 when his father died) never made the long journey to visit his grave.  Since 2009 I have been researching his family and ancestors.  Finding their home on Robben Island in Aug 2009 , then following a remarkable run of good luck on a brief visit to Umtata in Feb 2013, finding his unmarked grave there, I made a promise to us both that I would one day raise a stone above his grave.

I doubt that any permanent mark has ever been there since he died in 1927.  And now there is one.

When I made a mad dash visit to Umtata in 2013 on a mission to find The Doc’s grave, I will never forget the kindness of the local official in the Parks and Gardens office who, once he had personally gone to the cemetery to find the unmarked grave, explained how to find it, but also issued in very serious terms what amounted a moral contract:

‘One day, you must come back and raise a stone above his grave…so he is not forgotten.’

Well, 3 years later, it is done.  After so much frustration, endless phone calls and e-mails, the wonderful staff at AVBOB have walked the cemetery, once again found the unmarked grave, and raised a stone there for me.

And the words on that stone that mean the most were given to me by that kind gentleman from the Parks and Gardens office:

In our busy lives we actually achieve so little.  I feel that last Friday, I actually did something important.

The Doc is not forgotten.